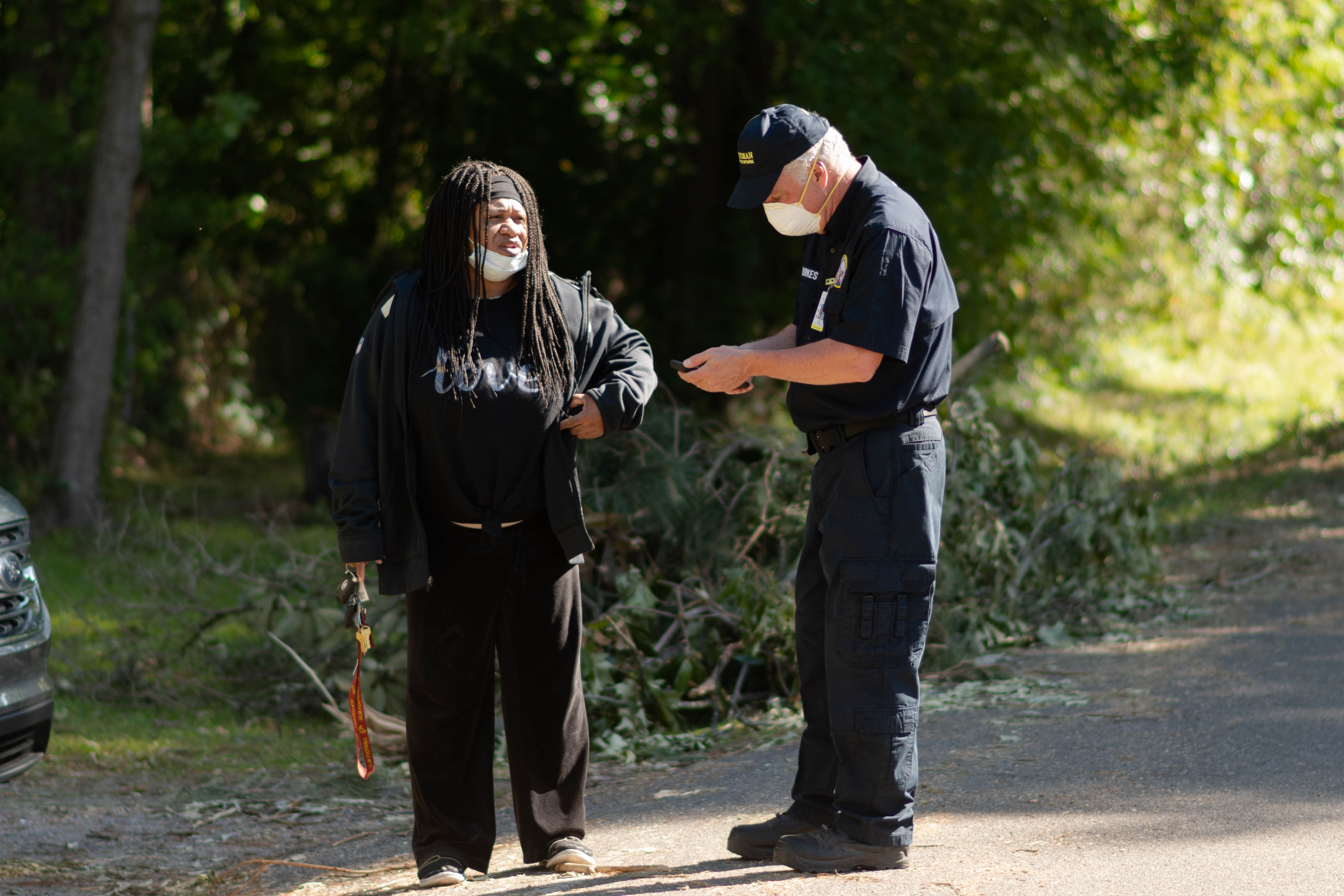 On Easter Sunday, April 12, the National Weather Service (NWS) reported an EF3 tornado that tore through neighborhoods and communities in West Monroe, LA. The NWS reports peak winds at 140 mph in the storm, which snapped hundreds of trees and destroyed several homes along its 8-mile path.

Meanwhile, the Minuteman Disaster Response (MDR) Operation Center was already assessing the storm damage and organizing the team’s deployment. Two days later, MDR arrived with a team of 24 well-trained volunteers to start clean-up. The crew hit the ground running and stayed for 6 days, working a total of 552 hours, clearing downed trees and power lines, cleaning damaged homes, downed trees, and other debris: making an impact on the local community. 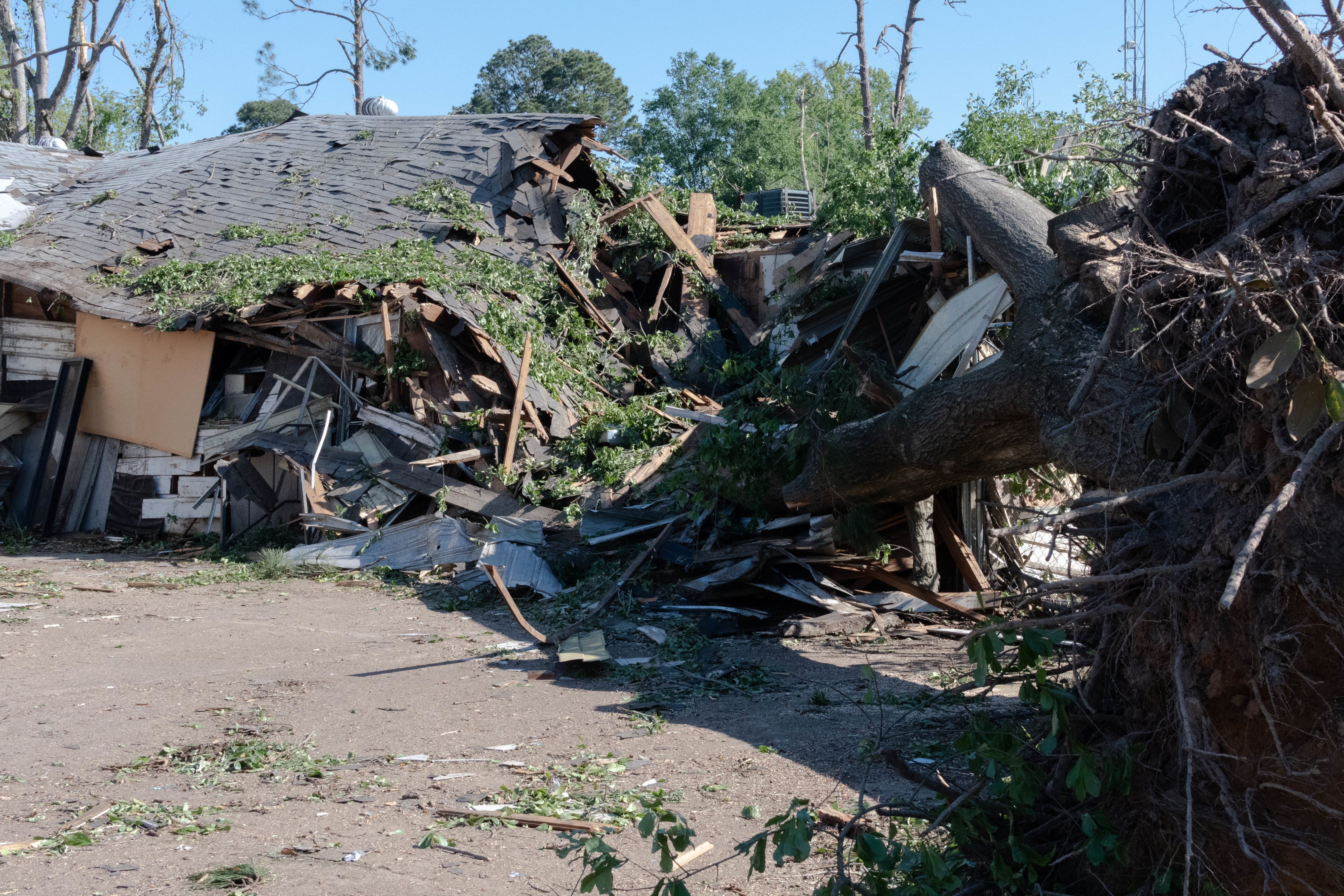 Chris Tracy, an MDR volunteer of over a year, said the team was fortunate to be housed in a home used by a local church for missionary students, and they set up base camp only a few miles from where the damage was. Due to COVID-19, MDR was unable to house their crews in their Mobile Sleeping Unit (MSU), so having a bed to sleep in each night was a luxury.

“A few miles away from us was the residential area where the tornado went through,” Tracy said. “The area was mainly full of single-family houses with numerous trees in each yard, many 50-feet tall.”

When MDR arrived, the streets were not fully cleared, with downed trees still blocking residents’ homes and restricting access to local power companies. Most of the first day was spent clearing streets, making way in front of utility companies so power could be restored. 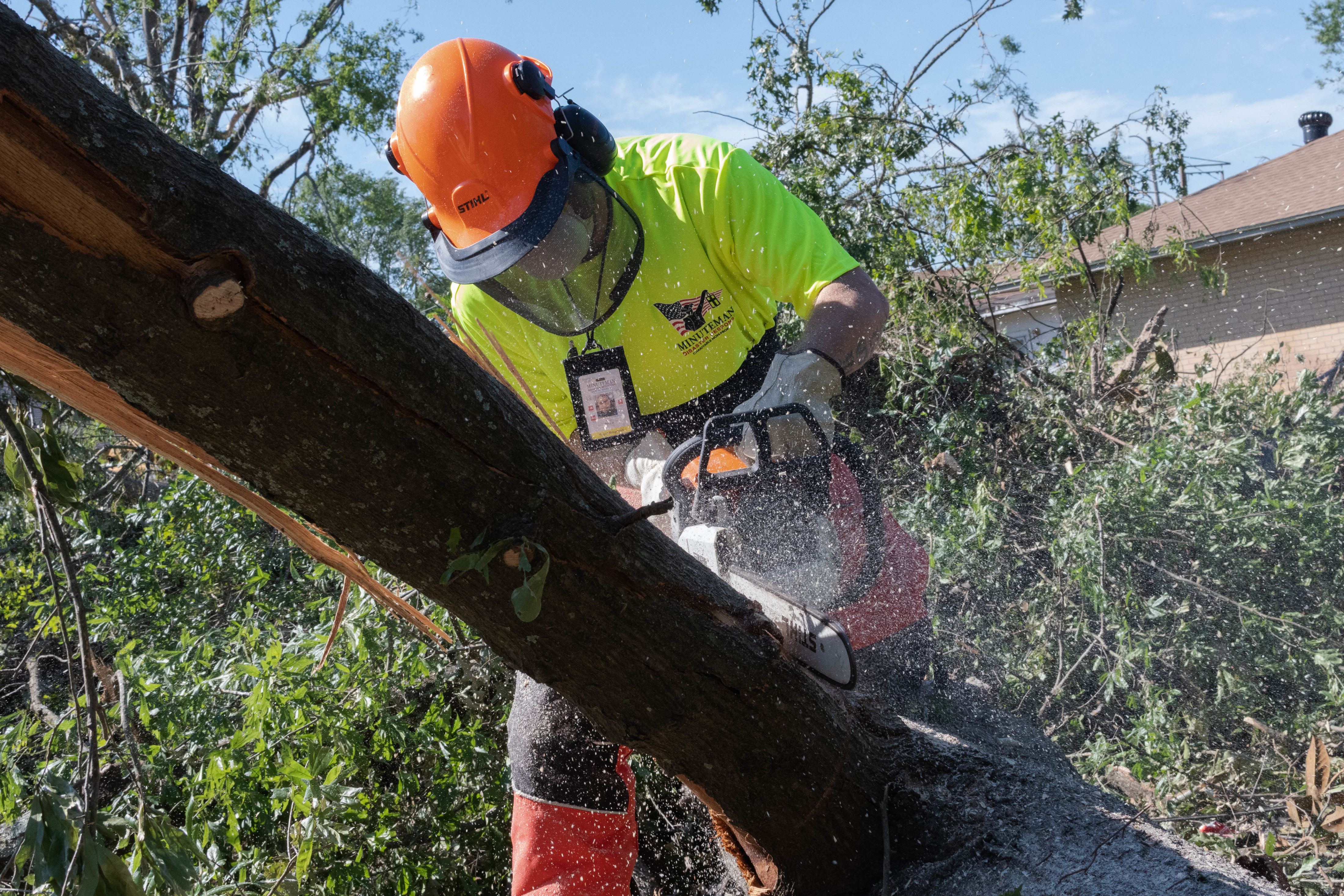 Trees were still down everywhere — across doorways, driveways, cars, roofs, and residents still didn’t have power. According to MDR volunteer Noah Brown, the relief team had to cut up the trees with individual chainsaws.

“As we were clearing roads, we were also gaining knowledge of the needs for that area,” Brown, who has been a volunteer with Minuteman for two years, said.  “We take this information down to help us create work orders so we can respond to those needs as time permits.”

There were a few locals they helped that stood out to Tracy. One was a lady who had such a positive attitude, despite what she had been through.

“She had three fifty-foot trees at the front corner of her house,” Tracy recalled. “One fell along the front of the house blocking her front door. Another fell along the side of the house all the way across her driveway, landing on the trunk of her car. She was out taking video as we were freeing her car, so she could get the insurance adjuster access to it. Rather than worry about the loss of her car, she was fully focused on the third tree that did not fall. Had it fallen between the other two, it would have hit the house at the bedroom where her baby granddaughter was sleeping. While she lost things, she felt truly fortunate.”

Both Tracy and Brown expressed the satisfaction this work gives them — serving people by showing up to help after disasters.

“There are a few transition points that you can see when you talk with the local people,” Tracy said. “When they start seeing people coming into the neighborhoods to help, there is a sense that they are not in this state alone. When the electricity comes back, it provides a level of comfort and normalcy. I saw this connected with a recognition in the comments from people, that this will come to an end and things will eventually return to normal.” 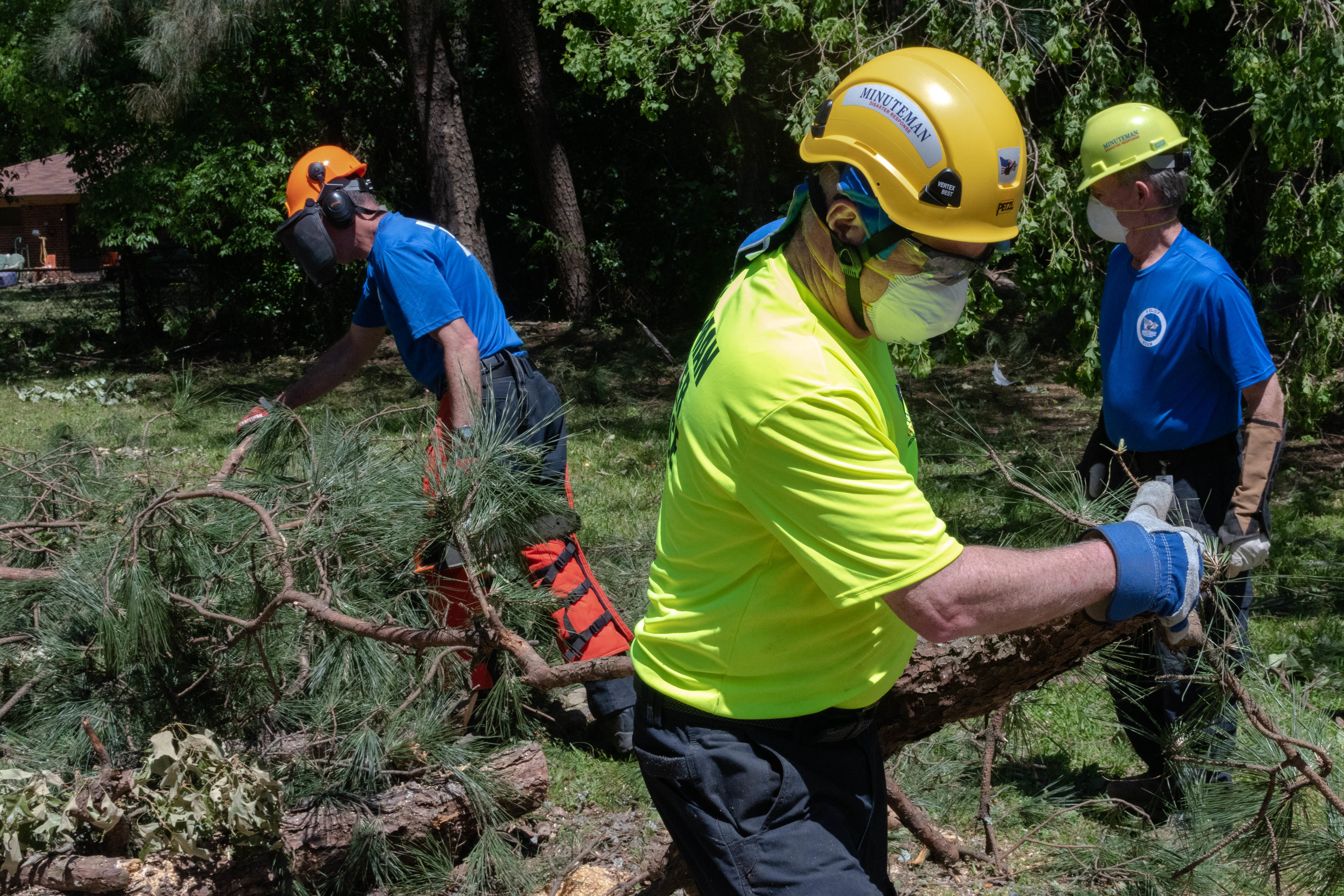 By the third day of deployment, the residential area had power restored to most of the homes.

After 6 days working in West Monroe, the team packed up and headed home. Although there’s always going to be more work to be done, they can leave knowing they made an impact on these people’s lives, Brown said.

Many Minuteman volunteers come and go at different times during deployments depending on their work flexibility, but all volunteers are prepared to put in the hard work from the time they arrive to the time they depart. Brown said running toward disaster isn’t always easy, especially with family and work.

“Finding the time, or just deciding to go even when it’s not easy is a challenge,” Brown said. “But if we don’t step up and help others in need, who will? We all need to be there for our neighbor.

As the Bible says: The great commandment is to love God and love your neighbor.” 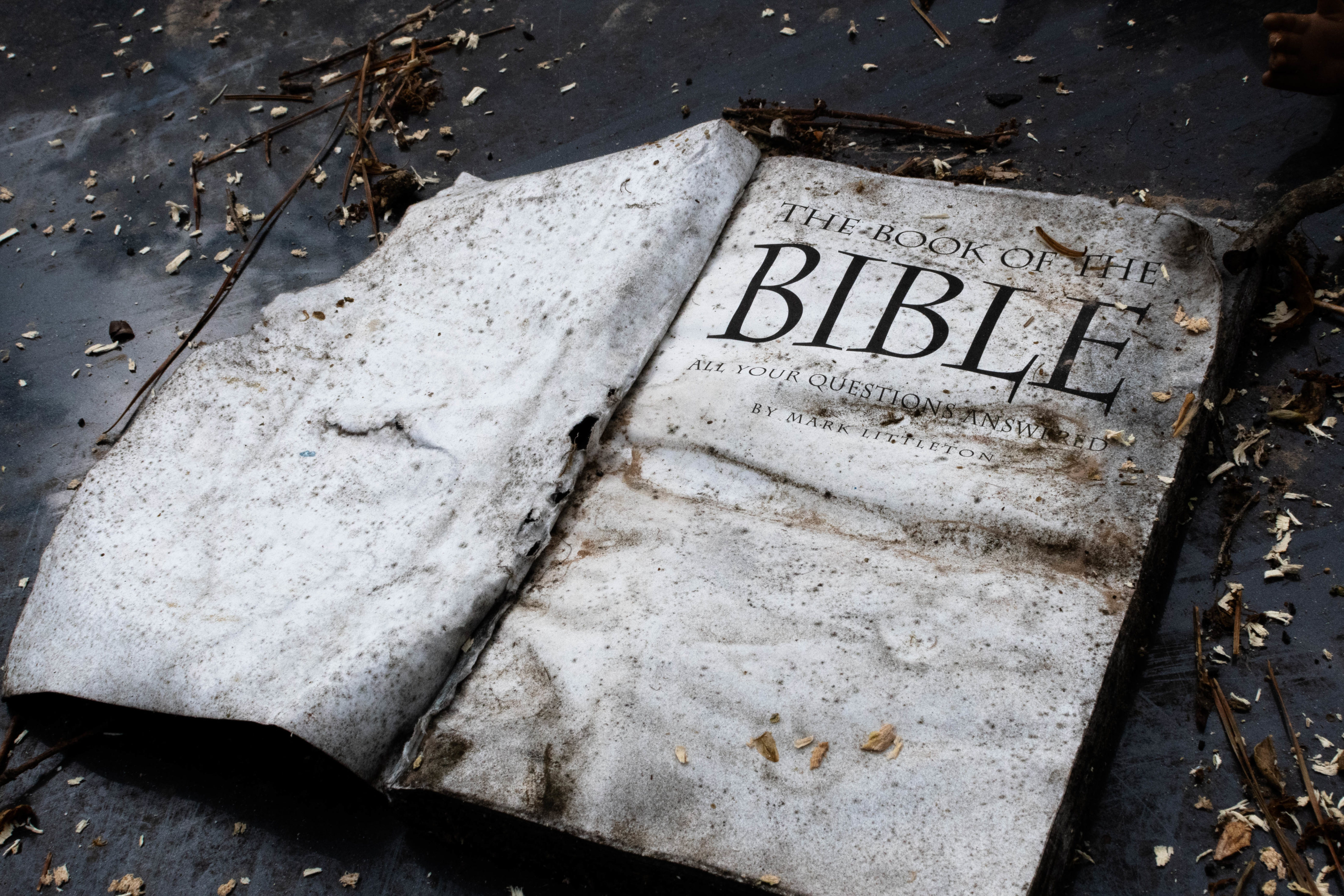