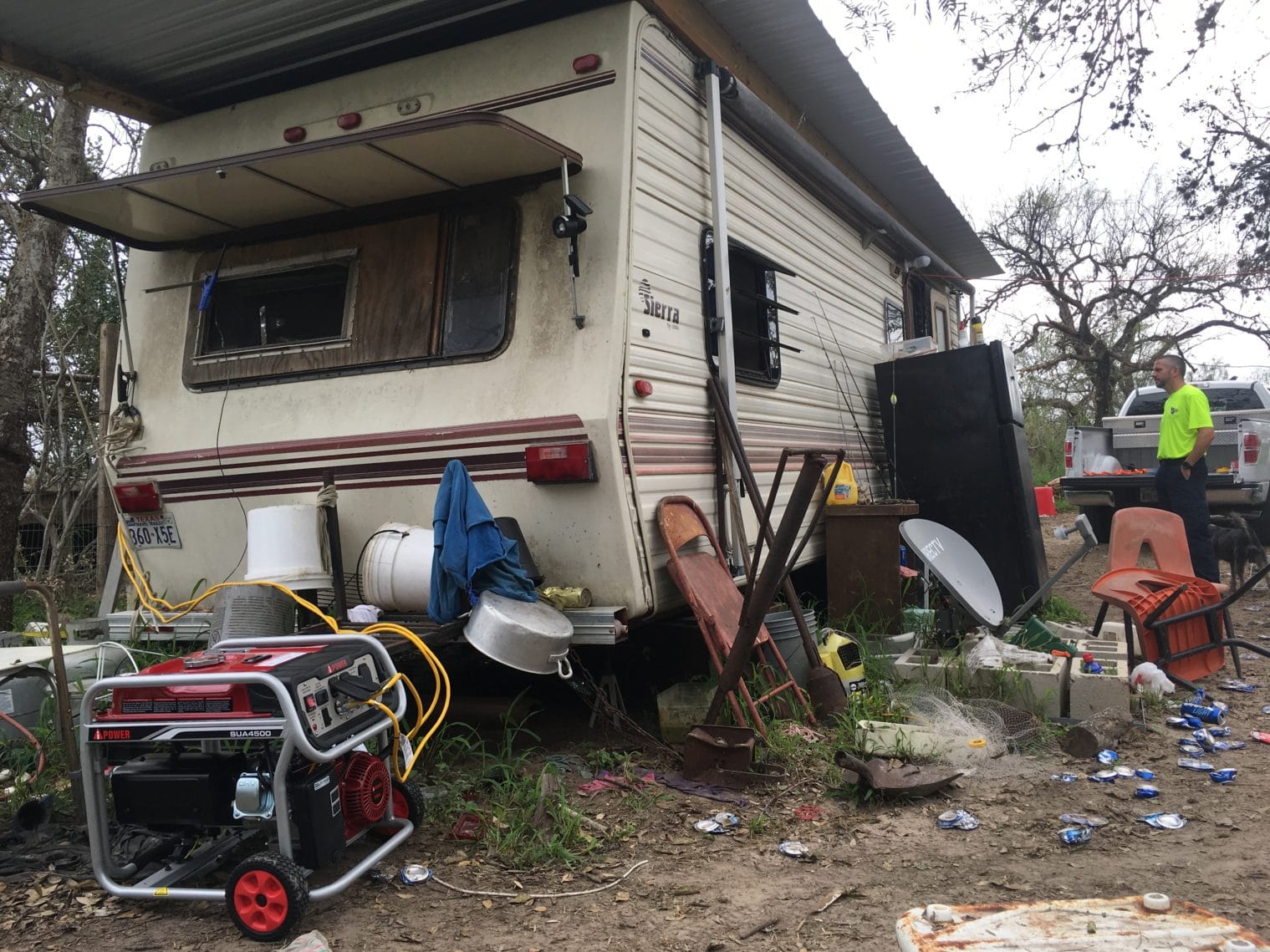 While 70% of Refugio evacuated, Candido Porras decided to ride out the storm in his travel trailer, located on seven acres south of Refugio. He had lived on this land, left to him by his father, for less than a year after losing his house in Woodsboro to back taxes in December of 2016.

Twelve days after the storm hit, he was without power and unable to operate his breathing machine. When the Minuteman team learned of his need, they immediately went to a hardware store in nearby Beeville and purchased a generator and heavy-duty power cords to ensure the equipment could be operated safely.

The next day, they made the drive out to his property, turning off the main highway onto a pot-hole ridden dirt road that took them back in time. Several trees were down, but they finally came upon the small clearing where Candido’s trailer was situated, between old storage buildings that had toppled in the storm.

Candido led the way to his trailer, his face beaming with every step as he helped Minuteman’s executive director, Matt Payne, and Jared Stump (a volunteer from Pennsylvania) unload the generator from their truck and place it next to his trailer, where it would power his breathing machine and window-unit air conditioner.

“You rode out the storm here?” Jared asked, pointing to the aging trailer.

“Yup!” Candido replied. “There were people concerned about me, but I tell ‘em, ‘I’m tough as leather.’ They offered to take me into town, but I wanted to stay with my dogs,” he said, pointing to a fenced enclosure that held five dogs, with a few more roaming outside the enclosure. “This is my kitchen over here,” Candido said proudly, pointing to a propane tank that was situated in the dirt next to a washing machine. “That’s where I do my laundry.”

As Candido talked Matt fired up the generator, restoring power to Candido’s trailer for the first time in twelve days. He continued to talk to the team for half an hour and showed them the inside of his trailer. “Part of my roof was ripped off and water came pouring in—it was like a waterfall inside my house!” he said with a smile.

“And you were here the whole time?” Jared asked again.

“Yup!” Candido replied. “My son-in-law stayed, too. He lives in town. He should have evacuated, but he wanted to stay and help [after the storm].”

Matt showed Candido how to work the generator, and told him it was his for as long as he had need of it. “If you can use it, I don’t need it back,” he said, but Candido shook his head. “I don’t want to take it away when there may be someone else who will need it. I’ll just keep it until the power comes back on, then I’ll give you a call.”

Jared explained that there were churches in Oklahoma and New Jersey that had taken special collections to raise the money that purchased the generator, among other supplies that were needed in Refugio.

“Wow,” Candido replied, nodding. “I heard of churches in Mississippi, Ohio, and Idaho that sent help. It makes me want to cry.”

As Matt and Jared concluded their time with Candido he thanked them for their help. “It’s nice to get back to some … what’s the word?” he paused for a moment, searching for the right word. “Normalacy,” he said with a smile. “You guys have a blessed day,” he said as they got back into the truck. “I know I did—I’m still here!”